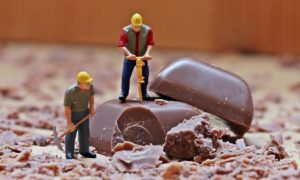 All true perhaps, but nevertheless it is a market within which manufacturers suffer the same frustrations as many others – namely trying to capture the attention of consumers and reinforce brand loyalty.

Cadbury has just launched its first major ad strategy since its ‘joy’ positioning one of 2013.  This major new digital campaign focussing on Heroes miniatures hopes to reconnect with families (especially those with teenagers) by illustrating their understanding of modern family life.  The idea that the chocolates can be a shared experience is further reinforced by the new packaging which will accompany the ad launch – a carton which converts to a sharing tray when opened up.

The ads themselves feature a series of situations where parents try to bond with their children by sharing in their hobbies.  Within the ‘Families Reunited’ campaign we can see short films where adults undertake various activities to break down the barriers between them and their teenage children, such as a father who takes a 4 week crash course in BMX stunt-riding to surprise and impress his 13 year old son. At around 20 minutes long, the films are designed to encourage engagement – all part of the plan ultimate plan of Cadbury’s Roses and Heroes Brand Manager, Aislinn Campbell.  She wanted to create something entertaining rather than simply being pure advertising and the films certainly do have the informal feel of many of the current popular TV documentaries.

Moving away from standard advertising ‘wallpaper’ is part of the Cadbury’s recognition of the value of making a deeper brand connection.  At a time when true audience engagement is essential they are perhaps trying to overcome some of their less successful attempts to reach out and have their efforts taken seriously.

Their last notable foray into the world of ‘woke’ marketing was the launch of their Unity Bar.  This blend of milk, white and dark chocolate was launched to correspond with Indian Independence Day and, whilst at first glance it might have seemed like a reasonably good (and well-intended) idea, it was almost unanimously scorned from every direction.  Ridiculed across social media, it was said to be corny and gimmicky in nature and did little to suggest any understanding of race relations or social tension.  It perhaps was helped even less by the fact that Cadbury had chosen to launch this representation of their own high moral standpoint at the same time as the company had been disclosed as one of those paying little or no tax in the UK…

Chocolate, cheesiness and corporate disappointment aside, the news of the change in tack from one of our best known brands tells us some important things about the current world of advertising.  Firstly, it is no longer sufficient to assume that the population’s love for a luxury product will sustain the market without a helping hand (especially at a time where food banks are a necessity for many, and treats may be much further down in the list of priorities for families than they have ever been before).  More importantly, this new campaign acknowledges the need for a deeper connection with the audience in order to stand any chance at all of gaining a fair share of that most valuable of commodities – people’s attention.

Here at RDZ PR it is something in which we believe wholeheartedly and on a daily basis we help businesses show their true personality, allowing them to stand out from the background noise with which we are all constantly bombarded.  Be it innovation, corporate social responsibility, great customer service or any other admirable feature, we ensure that we ‘share the greatness’ of our clients with those who matter to them and get the results that they seek.

If you’d like to find out a little more about what we do and how we can help you, simply get in touch via rachel.hargrave@rdz-pr.co.uk