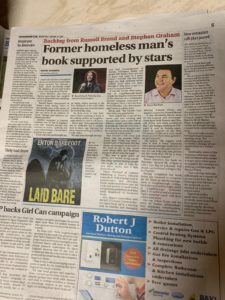 Yes, there may be many aspects involved in the process of bringing our clients to the attention of those who matter to them, but one way or another the valuable result is an uplift in interest – a raising of profile.

Another thing we speak about on a fairly regular basis is the story. Regardless of whether our clients are trying to land a particular piece in the local press or win a prestigious national award, for us, it’s first and foremost about getting to the crux of their story.  Some clients may not quite have realised what ‘their story’ is as yet (modesty and a lack of self-belief can sometimes get in the way) but others have a story which is very obvious to all; they just haven’t realised it’s true power or know what to do with it – yet.  Enter the RDZ PR experts who know exactly how to take that story and get it out there to the audience it deserves, telling it where it can make the biggest possible impact.

Seldom in our history have we come across a story quite as powerful as that of Enton Barefoot.

Born in the 80’s into normal family life and following a very similar life path to most of us, Enton’s life took a significant downward turn in the early 2000’s.   By 2007 he found himself drug and alcohol dependent, living on the street and scavenging in skips for food. This particular story, however, doesn’t end there.  In many respects that ‘rock bottom’ was just the beginning.  Determined to turn his life around Enton managed to address his addictions and use his experience to support and counsel others who have found themselves in the same dire situation he once did.

Anton has written a book entitled ‘Laid Bare’ in the hope that he can inspire those who feel powerless to take action and change their own story.  Published in January, RDZ PR are absolutely delighted to have been involved in the launch and promotion of this book and we have already seen a huge amount of interest from local, regional and national media resulting from these very recent activities.

Enton has appeared in a story in the Derby Telegraph, the Loughborough Echo and the Leicester Mercury; he has spoken with Ben Jackson on BBC Radio Leicester, has been invited by many Midlands venues to hold readings and book signings (including at Loughborough University and at Langan Tea Rooms in Burton on Trent).  News of his story has also filtered much farther afield and, as well as being covered by the ITV Central team, many branches of the Welsh Press have also shown great interest and he has been interviewed by Welsh radio stations too (his original family home was in Pembrokeshire).  Momentum is building on a daily basis and is bringing so many inspired individuals along with it on its way, including Russell Brand and Stephen Graham.

Of course, as we have already said, our experience in knowing where to take the story is just one factor in this this growing momentum.  There is absolutely no denying that Enton’s story is amazing in its own right.  It touches so many people by simple merit of the fact that it shows what is possible with a positive mindset and a determination to survive and, once again, thrive.

We are incredibly proud to be part of this journey and will be supporting Enton in his future endeavours which we know will be awesome and will be life-changing for so many people.

You can find out more about Enton, his book Laid Bare and the interviews and stories which have been recorded and published so far via https://therealbarefoot.co.uk/

If you would like to cut right to the chase, you can buy a copy of Laid Bare here https://therealbarefoot.co.uk/buy-the-book/

If you’d like to speak to someone about getting your story out there to your own audience then get in touch with Rach via www.rdz-pr.co.uk/contact-rdz-pr